Excerpts from
The Sum­mer of Yes

It was dark, near mid­night, and every­one in the house was sleep­ing. I stood watch­ing out the win­dow as Ray’s car pulled away, and I sobbed. My heart was break­ing. Why was this so painful if it was God’s will?  I didn’t under­stand.… With him went any roman­tic dreams I may have allowed myself.  Now, decades later, I think of it: call him back.  But then I didn’t.  I watched him go and wept.  I was going to be a nun.

Get­ting love as a child

I won­der how much slack God took up for par­ents who didn’t have time to lis­ten. God always lis­tened, I believed, and he knew me, knew my heart, even when I felt my par­ents didn’t have a clue…. Ther­a­pists  have said, “You must have got­ten love some­where,” and I always begin think­ing of my aunts, my teach­ers, some­times my sib­lings, but never before have I thought, Well, yes, I felt that God loved me and never stopped lov­ing me. That must have had a pro­found effect on sen­si­tive lit­tle me.

The first thing she does is cut my hair—not a real hair­cut, but a fast snip­ping off of clumps of hair. We are giv­ing up the van­ity and wom­anly seduc­tive­ness that goes with hair. A nun wouldn’t want either. It has to be done quickly because we are to return to the chapel by the time the vow cer­e­mony and the Litany of the Saints are fin­ished. In the next day or so, one of the novices with some exper­tise in the mat­ter will attempt to make a decent short cut of it, I know. But for now, it is just chopped. It feels like a shock. Hair has never been that impor­tant to me, but some of my class­mates, mostly 19– and 20-year olds, cry qui­etly as their hair falls to the floor. The image flashes through my mind of hair being chopped off as some kind of pun­ish­ment or humil­i­a­tion. I don’t know what to feel. 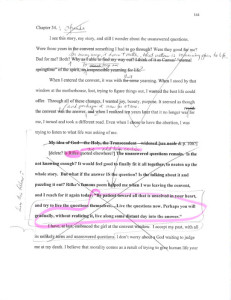 I saw what real ded­i­ca­tion looked like, and it wasn’t nec­es­sar­ily in a habit. It was ordi­nary peo­ple join­ing lines of marchers, risk­ing vio­lence and even death, to say that the laws of the coun­try were wrong and unjust. There was a shift inside me, and I leaned toward those good peo­ple. Not long after, I joined an inter­faith social action group in Cleveland’s inner city. I met Bill Bolton, an Epis­co­pal min­is­ter who looked more like a truck dri­ver. When he heard about my musi­cal back­ground, he asked me to help with the choir at his neigh­bor­hood mis­sion church that served blacks, whites, His­pan­ics, gyp­sies and Native Amer­i­cans. I accepted, and the fol­low­ing April he asked if I would come as an adult leader with a bus­load of his teenagers who were going on a week­end work camp to a poor church in the Appalachi­ans. I got per­mis­sion from my supe­ri­ors to go and enjoyed work­ing side by side with the wel­com­ing church’s mem­bers and our teenagers.

I saw clearly through all this that nei­ther the Catholic Church nor the con­vent had a cor­ner on good­ness and integrity. I saw courage and real com­mit­ment. I can see now that my atten­tion was being drawn away from the Rule of the Order, from belief that liv­ing in a prayer­ful com­mu­nity of women was the most wor­thy thing you could do with your life. My heroes were out­side the con­vent. They were work­ing in the neigh­bor­hoods, among real peo­ple with real prob­lems, try­ing to bring justice.

A man in my life?

In August, I came back from a fac­ulty meet­ing and found an enve­lope in my mail­box from Cal­i­for­nia. It was a let­ter from Jim, the poet-host whom I had thanked for the party, and it was very per­sonal. He told me he had watched me dur­ing the work­shop and felt I had a “sacred sen­su­al­ity” that he found beau­ti­ful. My heart was pound­ing as I read. I quickly stuffed the let­ter into my pocket and went to my room, where I read it over and tried to sort out my feelings. 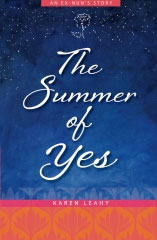